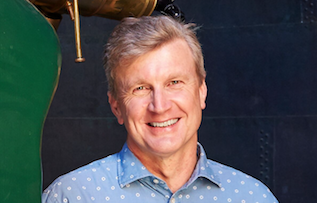 Professor Joss Bland-Hawthorn is an ARC Laureate Professor at the Sydney Institute for Astronomy at the University of Sydney. Prior to this, Joss spent 14 years at the Anglo-Australian Observatory, Sydney as Head of Instrument Science. Joss’s research is in Galactic archaeology, Milky Way dynamics, galaxy formation and evolution, and astronomical instrumentation. Joss leads the Galactic Archaeology with HERMES (GALAH) survey at the Anglo-Australian Telescope. He is co-founder of the Institute of Photonics and Optical Science (IPOS) and Project Scientist for the Sydney Astrophotonic Instrumentation Labs (SAIL) at the University of Sydney. He serves on the Astralis Board, the Annual Reviews of Astronomy & Astrophysics Board, and is Vice President of the Astronomical Society of Australia.

Joss completed his PhD at the Royal Greenwich Observatory and the University of Sussex, UK. He has received numerous awards including the 2017 Thomas Ranken Lyle medal from the Australian Academy of Science, the first astronomer to receive this in over 40 years.