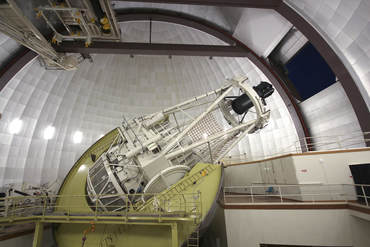 AAL is delighted to announce the establishment of the AAT Consortium. The Consortium, which includes thirteen Australian universities and managed by AAL, will fund and oversee operations of the 3.9m Anglo-Australian Telescope (AAT) from July 2018.

Located at the Siding Spring Observatory, the AAT is Australia’s largest optical telescope, and currently operated by the Australian Astronomical Observatory (AAO). It has been instrumental to Australian optical astronomy over the past 40 years, and a suite of world-class instruments will continue to see it undertaking competitive science in the coming years.
​
The new arrangements for AAT operations are part of an Australian Government package announced in the May 2017 Federal Budget: Maintaining Australia’s Optical Astronomy Capability. This package includes a 10-year strategic partnership with the European Southern Observatory (ESO), which gives Australian astronomers access to ESO facilities in Chile, including the four 8.2m-diameter telescopes of the Very Large Telescope.

The AAT Consortium will be governed by the AAT Council, with representation from all of the contributing university partners. AAL will act as Manager of the Consortium, with the telescope to be operated by the Australian National University.

AAL is pleased to announce that ASTAC’s Call for Proposals for Large Programs is now open. The deadline for this call is 11pm (AWST) on...
News, Proposals