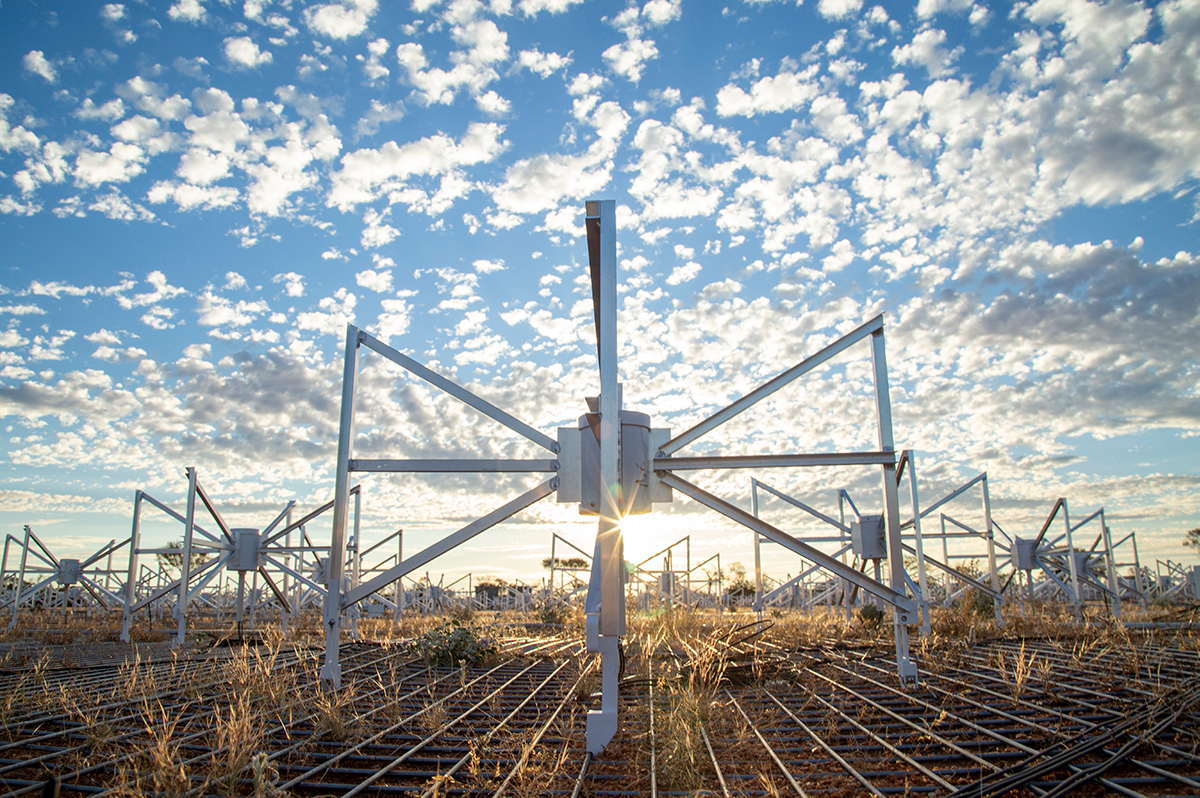 Close up of one of the original MWA array antennas. Credit: MWA Collaboration and Curtin University.

Researchers in Western Australia have found a pulsar for the first time using the Murchison Widefield Array (MWA) telescope, a precursor to the future Square Kilometre Array (SKA).

Pulsars are created by supernova explosions when massive stars reach the end of their lives. One result of such an explosion can be a collapsed core known as a pulsar – a small, incredible dense object with a strong magnetic field and a rapid spin. As it spins, a pulsar sends electromagnetic radiation out into space from its magnetic poles, which can be picked up at radio wavelengths by telescopes such as the MWA.

The discovery was made by PhD Student Nick Swainston at the Curtin University node of the International Centre for Radio Astronomy Research (ICRAR), while processing data from an ongoing MWA survey. Processing of this type can be incredibly challenging, especially at the frequency bands of the MWA, but fortunately researchers involved in this discovery were awarded time on the OzSTAR supercomputer. Operated by Swinburne University of Technology in Victoria, OzSTAR allowed them to crunch the enormous amounts of data made available through the MWA pulsar survey. Time on OzSTAR was allocated to the team at ICRAR by the Astronomy Supercomputing Time Allocation Committee (ASTAC), and ICRAR-Curtin astronomer Dr Ramesh Bhat says they could not have made the finding without it.

“ASTAC time has been very important for us. Given the small size of our team and the limited resources at hand, we wouldn’t have managed to get here without the consistent support we received via the ASTAC allocation.”

There is also an expectation that this finding may be merely the beginning, and that many more pulsars will be discovered by analysing the remaining MWA survey data using a supercomputer like OzSTAR – currently, only around one percent of this has been processed. MWA Director Professor Steven Tingay believes there is likely a large population of pulsars awaiting discovery in the Southern Hemisphere, and that the MWA and future SKA are well placed to find them.

“This finding is really exciting because the data processing is incredibly challenging, and the results show the potential for us to discover many more pulsars with the MWA and the low-frequency part of the SKA.”

The paper related to this discovery can be found here. The MWA has been developed by an international collaboration, including partners from Australia, New Zealand, Japan, China, India, Canada and the US. Maintained and operated by the Curtin Institute of Radio Astronomy, the telescope is financially supported in part by Astronomy Australia Limited (AAL), via the Australian Government’s National Collaborative Research Infrastructure Strategy (NCRIS) program.

AAL also supports the OzSTAR supercomputer via NCRIS funding, which is hosted and operated by Swinburne University of Technology. ASTAC is managed and operated by AAL and funded via the NCRIS program. For further information about ASTAC, or how AAL supports OzSTAR or the MWA, please contact Dr Robert Shen, AAL Director of eResearch. For further information on this discovery, please visit ICRAR’s website.