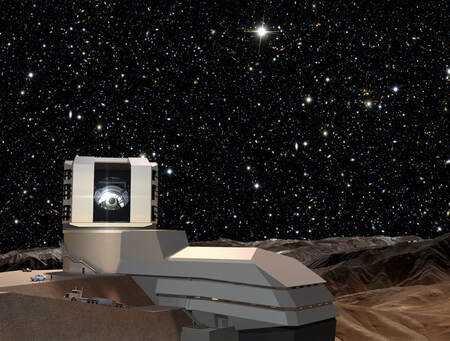 The Large Synoptic Survey Telescope (now the NSF Vera C. Rubin Observatory) aims to produce the deepest, widest image of the Universe at optical wavelengths ever produced. It will conduct a ten year survey of the sky from Cerro Pachon in Chile, using a specially designed 8.4 m diameter telescope with an extremely wide field of view (3.5 degrees), and a 3.2 gigapixel CCD camera. The primary science drivers are exploring the nature of dark matter and dark energy; mapping the structure of our Milky Way and nearby galaxies; cataloguing the solar system; and searching for transient objects. First light is expected on 2021, with full survey operations to commence in 2023.

In January 2020 the LSST Project became the NSF Vera C. Rubin Observatory, in honour of renowned US astronomer Dr Vera Rubin. The telescope itself will be known as the Simonyi Survey Telescope in recognition of a significant private donation made early in the construction phase, while the imaging survey program will now be known as the “Legacy Survey of Space and Time” (LSST).

The 2020 Mid-Term Review of the 2016-2025 Decadal Plan for Australian Astronomy recommended that Australia “Pursue data access to the Legacy Survey of Space and Time via the exchange of time on Australian national facilities.” AAL is now working towards securing LSST survey data access rights for as many Australian astronomers as possible, by providing suitable in-kind contributions that complement the LSST operations and science program.  In Nov 2019 AAL submitted a Letter of Intent along these lines to the US National Science Foundation and the Department of Energy. A positive response to the offered contributions (including optical and radio telescope access, software effort, and survey data) was received, and negotiations for data access rights for as many Australian PIs as possible are currently underway.

In May 2019 the first ever [email protected] meeting was held at the University of New South Wales, bringing together over 100 scientists from Australasia, Europe, Africa, and North America to discuss preparatory and planned science activities with LSST. Anyone interested in doing science with LSST is encouraged to attend the annual LSST Project and Community Workshop, the most recent of which was held virtually on 10-14 August 2020. The next annual meeting will be held in Tucson from 9-13 Aug 2021. There are also regular [email protected] meetings, the next of which is to be held in Rome in the latter part of 2020.

To keep up with progress on LSST and the Rubin Observatory, you can subscribe to the LSST Digest. ​For enquiries about the Australian LSST collaboration, please email [email protected]