eROSITA space telescope was built to provide the deepest map of the hot, energetic universe viewed in the x-ray. To date, the mission has detected more than a million objects, which doubles the number of objects discovered in the history of x-ray astronomy. Australian astronomers have been involved in identification of these objects revealing the nature of the hot universe closing off the 2020/21 period with a successful workshop and a variety of scientific discoveries. Finding a new supernova remnant and the first direct detection of an intergalactic filament 50 million light-years long – these and other scientific highlights round out an impressive year for the relatively new x-ray space telescope.

eROSITA (extended Roentgen Survey with an Imaging Telescope Array) is an instrument built for a Russian-German collaboration, launched on the Russian Spekt-RG spacecraft on July 13, 2019. Since successfully performing its first all-sky survey in June 2020, eROSITA produced images that are already 4 times deeper than the previous all-sky survey by the ROSAT telescope 30 years ago. Australian astronomers collaborate with the German eROSITA Consortium (eROSITA_DE) under the Memorandum of Understanding (MoU) by sharing data, models, algorithms, and simulations from eROSITA and Australia’s astronomical facilities. ​

Using the eROSITA x-ray telecope, in partnership with the Australian Square Kilometre Array Pathfinder (ASKAP) radio telescope, an Australian and German collaboration has made the first direct detection of an intergalactic filament – one that is 50 million light years in length. These filaments had previously been modelled as ‘roads’ of thin gas connecting clusters of galaxies but had (until recently) eluded direct detection. Involving Australian scientists from CSIRO and from Curtin, Macquarie, Monash and Western Sydney universities, the international collaboration with German scientists observed the interacting galaxy cluster system of Abell 3391/3395, where they used eROSITA and ASKAP to map a filament encasing the two clusters. Modelling of the early universe suggests that all known galaxies first formed in these hot, gaseous threads, sliding along them to clump together into clusters where the filaments meet. Thanks to the eROSITA collaboration, there is now confirmation for this modelling of a ‘cosmic web’ – and future observations are hoped to uncover more of these intergalactic roads connecting galaxies. See the published paper in Astronomy & Astrophysics.

Large-scale evolution of the A3391/95 analog found in the Magneticum simulation. The gas density distribution is shown in a cubic cutout region of 20 Mpc/h per side around the redshift of the main system in comoving coordinates from redshift z ≈ 1 (left) to z ≈ 0.34 (middle) and z ≈ 0.07 (right). We note the clumps falling in along the large-scale filaments, merging with the main systems to form ever larger, denser, and hotter structures. The corresponding movie with more redshift snapshots is available online at https://astro.uni-bonn.de/~reiprich/ A3391_95/. Credit: Reiprich et al. 2021, A&A 647, A2.

Discovered in an unexpected location far from the galactic plane, a huge supernova remnant (SNR) nicknamed ‘Hoinga’ that covers an area about 90 times bigger than the full moon, was found in the survey data gathered by the x-ray telescope and imaged using radio archival data from CHIPASS and SPASS Parkes telescope radio surveys. Hoinga is the aftermath of a huge explosion that occured upon the death of a massive star. While the actual explosion can only be observed for a relatively short time (in astronomical terms) a SNR can be seen for around 100,000 years glowing in radio and x-ray. Made up of the material ejected by the exploding star, known SNRs are usually found where there is more star formation, in the galactic plane. Not so for Hoinga, which has made astronomers question whether they may be many more SNRs to discover outside this star-forming region. Named after the Roman name of the lead author’s hometown, Hoinga is the largest SNR discovered in x-ray wavelengths, and the first for the Australian-eROSITA partnership, now exploring the Galaxy across multiple wavelengths. Read more about the discovery made by Australian astronomer Natasha Hurley-Walker and lead author Werner Becker in the paper published in Astronomy & Astrophysics. 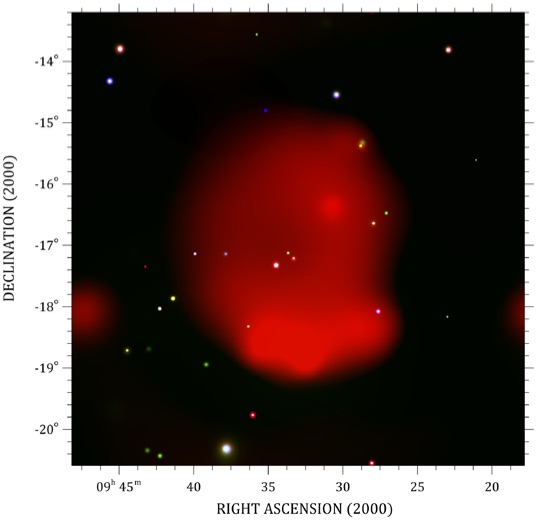 Held online due to the COVID-19 pandemic, AAL hosted its first eROSITA workshop over three days in February 2021. The online workshop was a great success, drawing together members of the Australian and German eROSITA communities to discuss the progress of ongoing collaborative projects, as well as to foster ideas for new projects.

A free event held via Zoom, the workshop included short presentations on a number of related topics. At the end of each day, opportunities for discussions were offered on Gather, a networking platform put to good use during the ongoing pandemic that prevented attendees meeting in person. See more on AAL’s event page for the workshop.